American Travel Guide Network | http://uzcms.com | Date: 2019-09-05 11:53
Preparation before the trip:
(1) Airfare: On the day of the 18th discount of China Eastern Airlines’ ticket promotion on August 18th
The itinerary is Pudong-San Francisco/San Francisco-Hawaii/Hawaii-Pudong, 1/3 is Eastern Airlines, and the middle section is Virgin America. More than 7,600 taxes, luggage is 2PC 23KG. Going to the United States, luggage is the key. In the past, buying and buying, you must pay attention to the free baggage allowance. Finally, Hawaii returned to the back of the tour group. Everyone is concentrating, throwing things, and remember to look at the free baggage allowance.
(2) Visa: The process of visa has been online. I will introduce the interviewer's question in general. Let us ask what we are doing. Let's say honeymoon, he will congratulate me first. I am an airline, so I will ask you. What is the route, the wife is a film and television company, and asked if there is any signing of American artists, after a while, the keyboard will pass. I have not read anything about the proof of employment.
(3) Car rental: The first international car rental, I chose AVIS, I chose FOCUS, and I was 160 in one day. However, when I saw ALAMO have 162 days to rent MUSTUNG, I suddenly regretted it. I definitely want to see the situation UPGRADE. California car rental recognition of domestic passports, as long as you translate according to the format provided by Ctrip, bring the passport GOGOGO on the line. Ctrip sent GPS, deposit 1000, sent over, used up and then sent back, this comes from thinking that Android's next GOOGLE map can travel to the United States, but fortunately no trouble let Ctrip send GPS, GOOGLE map, in the United States, can not locate I went there (I am MI4, in short, I can't locate it). Here I would like to recommend Ctrip's international car rental. It is quite reliable to send GPS, but the deposit is not pre-authorized. It is a direct credit card debit. As of the time of publication, I have not returned it to me. Don't let me recommend it~
(4) Itinerary: The best travel time in the United States should still be in spring and summer. Whether it is Yosemite or Yellowstone, the scenery will be very good. I heard that the autumn and winter are dry and frozen, and some places are not open. Anyway, 10 years. If you sign more, just put it next time. This marriage leave is requested 3 months in advance, and you can't change it. This time, it is mainly to explore the road first, deep into the nickname highway, and then fight for Las Vegas, Yellowstone + Grand Canyon, and then go from Yosemite to San Francisco. And the rainy rain in Hawaii for a week is even more obvious. The United States still has to go in April and May!
Departure~!
First day San Francisco - Monterrey
The MU589 landed early, the customs had not arrived, and waited for half an hour in the cabin, set foot on the American land, and first went to pick up the car.
It is very convenient to pick up the car at San Francisco Airport. As you know the arrow, you can find TRAM. There is a station called CAR RENTAL CENTER. I remember it is BLUE LINE. It is COUNTER at the station. There are about 4-5 car rental companies. The car rental industry is really developed. The airport express train is down to the RENTAL station. Less than 20, I found the AVIS counter.
The reception was an Asian middle-aged man with two beards. The length was very interesting. I said that I am coming to honeymoon, but also to come with me a GIVE ME FIVE.. I proposed to upgrade the car, he took out a more worn plastic paper, just like the domestic specials today. There are a variety of models on them. I saw the nightmare for BUMBLEBEE, asked him to upgrade a few dollars, he did not have to say, wrote a $75. After I waved it, he said, oh, I recommend you a convertible, (CONVERTIBLE), and recommend it to you not a convertible (HARD TOP), hard top, and wrote a $45. After I said that I could not accept it, he wrote 25 dollars. I suddenly felt that I had bought a STYLE big lobster in the Boracay aquatic market, and the price was 4000,500. I said 15 lines no, he pretended to contact MANAGER, and finally said 22 lowest price. It’s been 10 minutes at this time, no trouble, deal, I asked MUSTUNG a few dollars, he said that the price of a bumblebee, I suddenly regret it. Plus the tax is messy, so renting a bumblebee is about 400 days. This rented for 8 days, which is equal to paying more than 2000. During the period, I asked him if he wanted to pay the deposit. He said no, I rent a car in China, I have to pay a 3000 car deposit, and 1000 illegal deposits. I don’t want to sigh that this is a car developed and the people are free. The country is over. . After leaving the counter, I still want to find a staff to pick up the car, find a circle, and ask people, there is a parking space on the original document, driving directly in the past, the key is inserted on it. Far away to see the bumblebee, a burst of excitement, start the car, but also a burst of excitement, the car will not introduce, the latest odd is that there is a head-up display (HUD), it is to see the world ~ rough hair! ~
Summary: Rent a car in the United States, do not select a small car, or a sports car, or an SUV. Not expensive, really!
In case you want to upgrade, remember to bargain!
1 Old Fisherman's Wharf
The route on the GOOGLE map feels good, but it is very far away. The airport is coming out and it takes an hour and a half to go to the old Fisherman's Wharf in Monterrey. 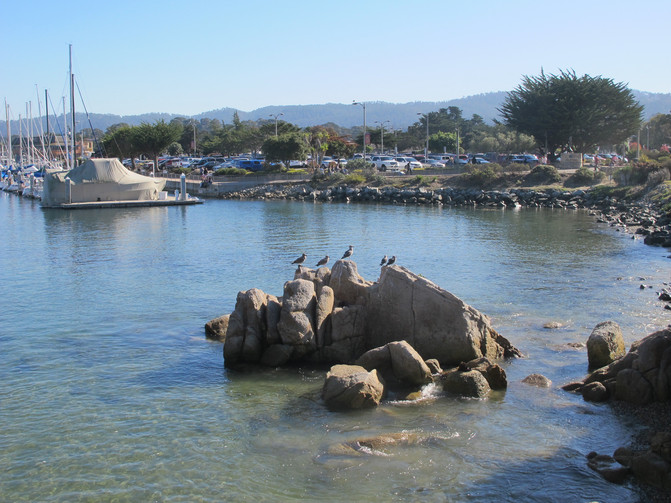 This is the Fisherman’s Wharf. The place is small, almost all small restaurants.
217 miles
This is the only toll road in California's nickname highway. It used to be private and was later opened to the public because the scenery was so good. Followed by the navigation, charge 10 dollars, along the road are luxury homes, open to the beach, the scenery is as follows.